The only on-demand die holders in Japan

Taking advantage of the benefit of our parent company also being our client, we collect customer information and take part in active exchange of opinions on forging technology, the results of which we apply in our design.
In the forging industry, the Kusunoki name has become the symbol of “die holders for hot forging press.” As “the only on-demand die holder manufacturer in Japan,” Kusunoki Dieholder has achieved high quality and fast delivery, boasting a top-class technological level.

developed for the first time in Japan in 1982 have contributed to shortening the time for die replacement in the forging press, saving power, labor, and space, and dramatic improvement in safety, thus revolutionizing the industry. They are now installed on over 150 lines in Japan and overseas.We also offer automatic transfer equipment such as incidental die replacement equipment and material supply equipment, contributing to the stable supply of forged products. In recognition of these achievements, we were certified as an “Aichi brand company” in 2010.

Die holders do not only fix the die to the press machine but also act as guides to accurately move the die up and down, enhancing manufacturing accuracy.Also, dies are very heavy and cannot be easily lifted by hand to attach to the press. Moreover, dies need to be replaced every time a different product is made.Therefore, to manufacture various kinds of products quickly, it is important to be able to exchange the dies quickly.
As a result, attaching the die to a die holder outside the press and setting it on the press together with the die holder has become mainstream.Taking such limitations into consideration, our die holders satisfy the following conditions.

1.The concentricity of the upper and lower dies is accurate
2.The dies must be precisely and strongly fixed
3.The dies can be replaced quickly

A variety of die holders are required by customers. In order to manufacture a die holder that is pleasing to customers, technology is important, but of course we think communication with customers is the first.
We are a manufacturer of development and design, we are proud to be able to produce great facilities together with our customers.

When removing the die from the press machine, we remove not only the die but also the plate laid to prevent wear of the die holder body (aka hard plate). By removing the top and bottom dies at the same time, the die is “sandwiched” between hard plates. We call this state of the die and hard plates a “cassette”. We replace the cassette leaving the die holder inside the press machine. Moreover, a mechanism for fixing the cassette by hydraulic pressure is built inside the die holder. This eliminates the need for the extremely dangerous, dirty and effort-consuming work of detaching the die with bolts inside the press. It makes fixing the die safely and easily by a simple button operation possible. 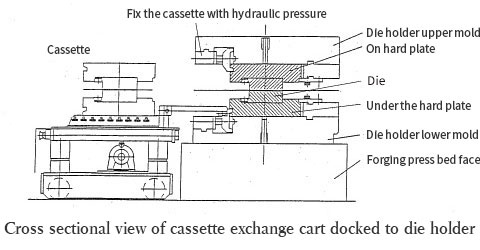 Also, since cassettes are lighter and smaller than conventional die holders, they do not require large-scale like a die holder replacement machine, and cassette handling can be carried out from a simple push car. There is also no need to secure a wide area for cassette storage such as required for a die holder. Inversion of a cassette upper die can also be done more easily than for a die holder upper die, with no dangerous operation involved. 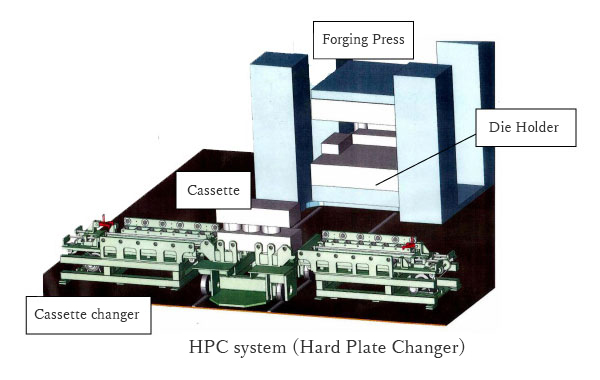 We were able to establish these merits at the same time.

Traditionally, there were two ways of replacing a die already forged with a die to be forged.

1.Replace the die only (in-line setup)

2.Replace the die and die holder together (off-line setup) 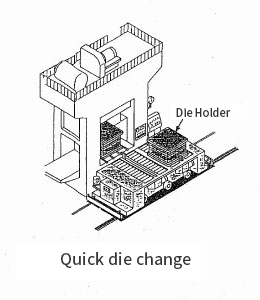